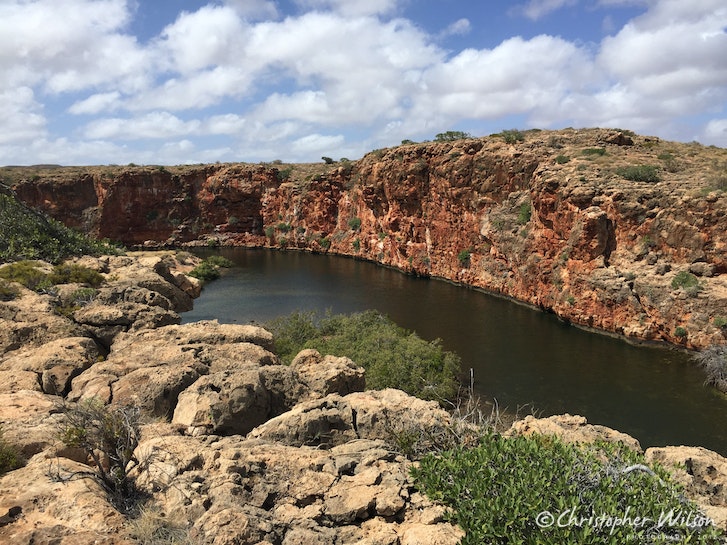 Well our stay at the free camp just outside Old Onslow was indeed relaxing. The views over the river, which is lined with white River gums wAs indeed picturesque, and Louise had great fun photographing the many birds and then identifying them. A rail ( or in twitcher speak a buff banded rail) befriended us and hung around the camp the whole time we were there, not scared or intimidated by us at all. the only thing wrong with the camp was the increasing wind squalls that arose from about midday and went right through till sun up next morning. The country here has not seen rain of any sort for at least 4 months and the wind threw up the fine red dust everywhere.

Our drive to Exmouth was fairly uneventful. We had decided that we would not stay in Exmouth, but rather at a Conservation Park called Giralia  some 120 Klms from town. The property where we stayed at used to be a working sheep farm but was bought by the WA government and turned into a conservation park. We stayed two nights and if you are on Facebook you would have seen photos of one of the visitors to our camp. We left Giralia and headed into Exmouth to restock. Being a town of only 2000 odd residents we didn't expect much but a visit to the bakery changed our mind. It was good as or even better than any good bakery in the big smoke. The town also has two IGA supermarkets in competition with each other about 50 metres apart… strange.

The main reason for Exmouth was the US Communication set up…North West Cape that is the main communication base to all US nuclear submarines around the world. A very strategic site…. I wonder if it is in North Korean sights.  The communication towers are just outside town, and one of them is the tallest structure in Australia according to all the visitor info, but a think a building in Melbourne may now hold that honour. Anyway the tower is taller than the Empire State Building.

After stocking up we headed out to Cape Range National Park where we stayed for three nights at a place called  Yardies Creek.  In WA all the camp sites in national parks are very well laid out and this one was no exception. Next to the beach, there were only nine sites there plus the camp host. We set up camp and explored the beach and nearby inlet. Next day we walked up the Yardies River Gorge. The trail takes you up on top of the gorge as the area is all limestone and very fragile. There are several endangered species in the park, so where you can and can't go is strictly controlled. One endangered species in a black footed rock wallaby which evidently is a very timid animal and easily disturbed.  We saw one hopping away as we climbed the Gorge, plus plenty of bird life.  We also got some good photos as well.  We really like this place so next morning decided to explore further. There are heaps of small camp sites along the numerous beaches that make up the park which covers about 50 % of the Ningaloo Reef. The reef has world heritage listing and has very heavy protection. With the coastline along it being either National Park, or coastal protection zone there is no major developments impinging on the reef so it is almost in its natural state. As well being very close to shore it is easily accessible to view and we will be coming back. We explored all the camping areas and beaches to pick where we will stay next time. That is more likely to be earlier in the year, around May so we miss the windy season. And then we can go on and visit the other areas we have missed on this trip or go back to places we want to visit again. One of the great things about WA is there is a lot of space so it does not appear too crowded. One of the biggest attractions in the national park is the turquoise water over the reef which runs along the shore line, with whale sharks, and a multitude of marine life. Whales run up the coast near the reef, but it is now past the season so sightings now  are few and far between.

On the way back to our camp we came across an Australasian Bustard. These birds are rare, and because of their acute shyness are very rarely seen. So how lucky were we. Louise got a couple of photos as it calmly walked off into the bush.

We would have stayed here longer but the winds come up in the afternoon and like Old Onslow stay till first light next morning. On our last afternoon the winds were indeed strong and buffeting and it became very difficult to cook dinner as the gas was continually being blown out. It got worse overnight withe winds of over 50 Klms an hour more. It broke one of our tent ropes overnight holding up the vehicle awning. We were up early next morning after having very little sleep and in the heavy wind packed up and headed into town to have breakfast at the Bakery.

After breakfast we headed off to Carnarvon. This drive was also uneventful, driving in country similar to the Tanamai. As we got closer to Carnarvon, it was just miles and miles of spinifex, no trees and very little else. On the way we stopped into Coral Bay. At last we found a tourist spot a la Queensland. Up market resorts and caravan parks lined the shore. A beautiful little cove but too many people and too much development for our liking. But I can see why families like it as the bay has so much to offer kids. Snorkelling, coral viewing, kayaking etc.

Just below Coral Bay we crossed the Tropic of Capricorn  some two months after going across it on the way to the Kimberley's. Our 2 months of being in the tropics has finished. Now fully acclimatised to the heat and no rain we are going to have get used to cold and rain again.

We moved on the Carnarvon which is the first non mining town we have visited in a while. It was founded in the late 1800’s as a port to ship supplies for the wool farmers. It is also home to a space tracking complex as well as a huge agricultural irrigation area. They have been growing bananas here since the 1930’s and today it is a huge food bowl of bananas, avocados, mangos, tomatoes and other salad vegetables.

Tomorrow we are heading off to Quobba where there are blow holes and a memorial to the sailors who lost their lives with the sinking of HMAS Sydney in the Second World War, the wreck was found just off the coast from Quobba.