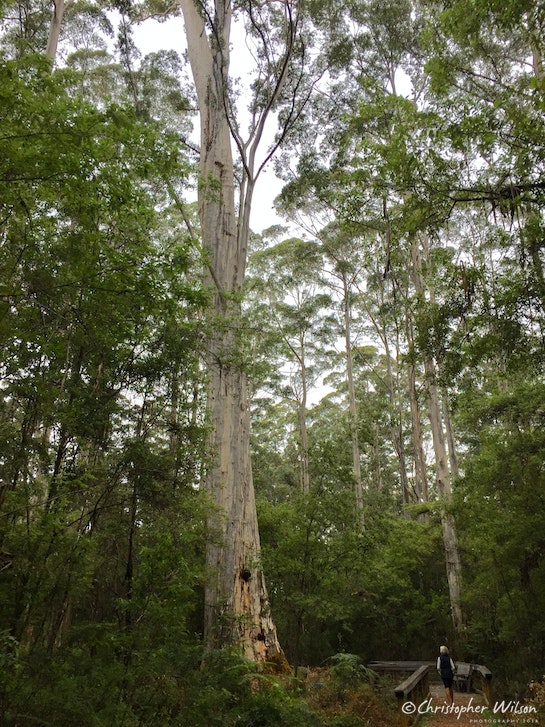 We left Canebrake Pool early and started the short trip to Manjimup. Part of the journey was along roads we had already traversed, but the beauty of the country side just made you appreciate this part of the world more. Just before Manjimup we came to a little river that had a walking trail and some historic relics to see. We stopped for a cup of tea and had a look around and started to get the feel for these forests of Jarrah and Karri trees. These both are majestic trees in their own right and only grow in certain soil types in south west WA. we were quite taken back by the whole experience so we're happy to motor on further into these majestic forests. We arrived at Manjimup just before lunch so decided to press on to our camping ground in the National Park so we would be sure of a spot as they appeared to be scarce. We had chosen to camp at a place called Drafty’s in the Warren National Park. It was indeed a beautiful area with large camp sites within the forest and just enough sunlight to make the solar panels work. We were met by a volunteer host who gave us a choice of two sites to choose from.

We set up camp, had lunch and explored the surrounding area. The camp ground was just near the river and to get to it you need to drive along a very narrow windy and hilly logging trail amongst towering Karri Trees that are dead straight and rise up 40 metres and more. Their yellow orange bark shining in the forest. It is indeed a sight to behold. Some of these trees are over 300 years old.

Next morning we were up early as we had decided to go back to Manjimup for a farmers market before doing a forestry self guided drive through the Shannon National Park. The farmers market was great with plenty of fresh vegetables and fruit, especially pink lady apples which were first developed here. We also had a tasting of a new apple that they have developed which will be available in shops in the easter states next season. They are called Bravo and are delicious.

The Shannon NP is famous as the river that runs through it has its source and finish within the park itself. So it is a total Eco system contained within the one park which they claim is rare.  The area has a mixture of two main soil types that grow Jarrah and Karri, but not together. So as you drive through you encounter full forest of Jarrah and then suddenly as though there is a fence line a full forest on Karri. It is magnificent. The Karri forests are my favourite because of the straightness of the trees and their height.  A full grown Jarrah or Karri has enough timber to build 2.5 average sized timber houses just in one tree. You start to feel insignificant when you stand under one and look up. The photo at the top of this blog will give you some idea of what I am talking about. And that tree the King Karri was just over 70 metres high and about 5 or 6 metres in circumference at the base. The King Jarrah by comparison was 2.5 metres in circumference and 50 metres tall but over 500 years old. It had an arrow blazed on it in the 1920’s to claim it for the government and to stop it being logged. It was a grand tree even in the 1920’s.

The exploration took all day and we returned to camp for an early night. During the day we encountered patches a very heavy rain, the first experience of heavy falls since we left Cobar some three months ago. It also rained during the night and we woke up to a very overcast day. We headed off again and did another self drive forest explorer trail. This one was mainly through Karri forests and also included a sight where protesters in the mid nineties stopped the logging of the forest in the area which led to the national park that is there today. The area includes old growth forest as well as replanted forests. Some replantings were done in the 1920’s 30’s and the Karri trees would only be about 450mm in diameter. It brings to the forefront just how slow growing these trees are. We also visited Snottygobble loop. We wanted to find out if there was any clue why it was named that. There wasn't so you will just have to use your imagination.

Next morning we packed up for the next leg and had picked on a camp ground recommended by Drafty’s hosts, being  Parry’s Beach just out of Denmark.  In Denmark we found the best meat pies. They had heaps of awards, and having eaten one I know why. We drove through more Karri and Jarrah forests and then suddenly as we got nearer to the coast the type of bush and trees changed. We were now in Tingle tree country. We didn't explore the tingle forests as we were still trying to digest the majesty of the forests we had just been through. Also we heard that the camping ground at Parry’s was very popular so didn't want to miss a spot. We got there about lunch time and were lucky as we were able to get a very sunny spot. This camping ground reminds us of the old style camping grounds on the south coast of NSW that existed in the 50 and 60’s.  The beach vegetation has been cleared just enough to fit a small van or tent. We have flushing toilets and hot showers and we are right on the beach. What else do you need.  Its so good we have extended our stay to 3 nights. Yesterday we explored the area into Denmark and today we explored the local beach. The scenery is stunning, with large granite outcrops set out from the beeches. The turbulent southern ocean hits them full on giving great displays. We took heaps of photos in the hope of getting one spectacular one. Tomorrow we are off to Albany as the car needs servicing having done 10,000 Klms since we left Broome.

We are now embarking on the last leg of our great journey and at the moment it looks like we will make home just after Christmas. Till next time.